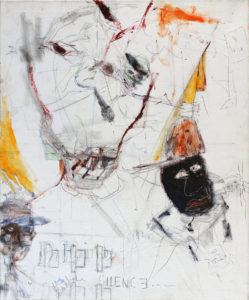 Please scroll down for more works of the artist

Peter Doherty (born 1979) is an English musician, songwriter, actor, poet, writer, and artist. He is best known for being co-frontman of the Libertines, which he formed with Carl Barât in 1997. His other musical projects are indie band Babyshambles and Peter Doherty and the Puta Madres.

Doherty was born in Hexham, Northumberland, to a military family. His father, Peter John Doherty, was a major in the Royal Signals, while his mother, Jacqueline Michels, was a lance-corporal in Queen Alexandra’s Royal Army Nursing Corps. His paternal grandfather was an Irish immigrant from Cheekpoint in County Waterford; his maternal grandfather was Jewish, the son of immigrants from France and Russia. He was raised Catholic. He grew up at a number of army garrisons across Britain and Europe, with his sisters Amy Jo and Emily. Doherty was the second of the three children. It was while living in Dorset, aged 11, that Doherty began playing guitar, originally in an attempt to impress a female classmate, Emily Baker. He achieved 11 GCSEs, of which were A* grades, at Nicholas Chamberlaine Comprehensive School in Bedworth, North Warwickshire, and four passes at A-Level, two at grade A. At the age of 16, he won a poetry competition and embarked on a tour of Russia organised by the British Council.

After his A-levels, he moved to his grandmother’s flat in London – where he said he felt ‘destined’ to be – and got a job filling graves in Willesden Cemetery, although most of his time was spent reading and writing while sitting on gravestones. In a clip later made famous by YouTube, an eighteen-year-old Doherty can be seen in an interview with MTV, on the day of the release of Oasis’ Be Here Now album. He attended Queen Mary, a college of the University of London, to study English literature, but left the course after his first year. After leaving university, he moved into a London flat with friend and fellow musician Carl Barât, who had been a classmate of Doherty’s older sister at Brunel University.

Painting and writing
In June 2006, Doherty announced that he had signed a deal with Orion Books to publish his journals, in which he had recorded poetry, drawings, and photos over the course of his career. The book, titled The Books of Albion: The Collected Writings of Peter Doherty, was released on 21 June 2007.

On 15 May 2007, Doherty exhibited his paintings for the first time. The art exhibition took place at the London’s Bankrobber Gallery, and was on show for one month. The collection featured 14 paintings.

An exhibition of Doherty’s paintings titled, “Art of the Albion”, took place at the Galerie Chappe in Paris from 25 April to 25 May 2008. Over the years he had several exhibitions.