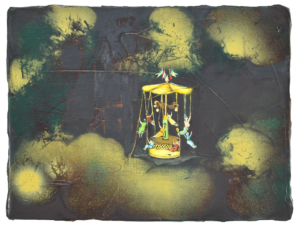 About the „Déjà-vu“ series

Andrea Damp was born in 1977 on the island of Rügen (today Germany), then part of the GDR.
Her hometown on the south-eastern end of the island was founded by fishermen in the early 19th century
and has retained its former form to the present day.
For generations, the family lived with nature and fishing, a tradition that is now continued by her older
brother.
Already in her early childhood she showed her love and talent for painting, initially supported by the former
village school teacher, who was experienced in dealing with paint and brushes and taught her first basic
knowledge.
From the age of 16 Andrea Damp received painting lessons from Hans-Dieter Barthel, an artist living on
Rügen, who studied at the Kunsthochschule in Berlin Weißensee and actively participated in the cultural life
of the former GDR.
Through this support and her intensive, almost manic work, a large number of figurative works were created
early on: landscapes, seascapes and still lifes, which are characterised by extraordinary craftsmanship and a
feeling for colour.
At the University of the Arts (UdK) Berlin she was finally accepted into the class of Prof. Hans-Jürgen Diehl.
Diehl was an important representative of critical realism, who, with the end of the division of Germany,
declared his previous, realistic work to be complete and turned away from representationalism.
Since then, he has pursued a non-objective, non-narrative concept of painting.
Andrea Damp is still in close contact and exchange with him.
Andrea Damp’s work rests on these two foundations, the early narrative influence of her time on Rügen and
the strictly abstract view of her student days in Berlin. The ambivalence of these two ways of thinking still
forms a fixed factor and the aesthetic appeal of her painting.
At the age of 12, 1989, the era of the GDR ended and not only for the young artist and her family followed
years of uncertainty, change and adaptation.
Childhood in the enchanted and secluded village of Neu-Reddevitz ended all the harder and more abruptly
as the entire political, social and cultural system lost its reality overnight.
In 2012 Andrea Damp began a series of small formats under the joint title “Déjà-vu”.
Since then, the painter has repeatedly worked on individual paintings and small series under this title, which
over the years have become a permanent element of her work and for which she exclusively uses two canvas
formats: A portrait format measuring 30 x 24 cm and a landscape format measuring 30 x 40 cm.
They are personal images that sometimes threaten to slip away from memory, but whose expression and
intensity have a universal, universally valid claim. In them, the artist evokes, processes and preserves the
time, the moments and the feelings of her childhood on Rügen and the lightheartedness in one of the most
beautiful and remote spots in Germany.
Here the terrain was created on which “being alone” could separate from “loneliness”.
The protagonists are alone in a multitude of these small pictures. Immersed in action or thinking, the activity
described is reduced to a minimum. Free of distracting factors, these works describe a continuum between
figuration and environment, between narrative representationalism and painterly abstraction.
This state of self-forgetfulness was a formative feeling of Andrea Damp’s childhood, which can come to life
every time through her occupation with painting and the creation of these pictures.

Each of the small-format pictures is self-contained. What they all have in common is the same height of 30
cm, which makes it possible to put together sequences comparable to a film strip, which draw an ever finer
and more differentiated panorama of what the artist preserves in them and keeps in living memory as the
number of images increases.
The colour of these paintings is influenced by Andrea Damp’s earliest painting experiences. Painting
experiences on an island where clouds, water and nature in the course of the seasons leave impressions of
the greatest intensity, whose fascination and grandeur already fascinated painters like Caspar David
Friedrich.
The craftsmanship acquired over many years and decades and the constant discourse about painting, the
confrontation with representationalism, abstraction and informel, all this flows together in these small, calm,
concentrated, narrative and infinitely virtuosic pictures and assigns them an outstanding position both in the
work of the artist and in the painting of their generation.