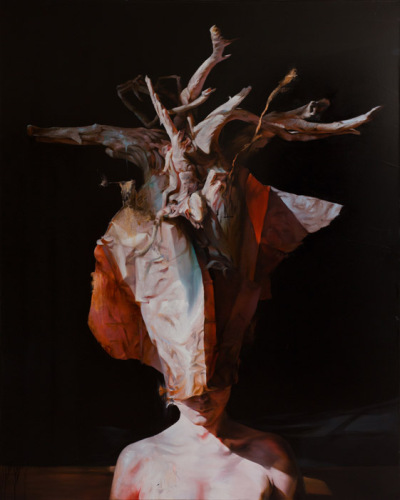 The paintings of the Italian artist Dario Puggioni impressingly hold features of classical artworks, serving Puggioni as a basis and contrast to technically strip his pictorial material of the real and to regroup the substance of his motifs in a completely modern way. His works are meticulously arranged and painted with oil on aluminium, wood, paper or also copper, resulting in stunning detail and effect in large as well as in small formats.

The heads of Puggioni’s figures are semi-organically extended with structures, which impose like hoods or branchy weaves overgrown upon the human tops. These headgears appear through their abstractly textured composition not only astonishingly graphic and vivid, but also archaic and powerful. Just what is paving its way here in such tremendous form and design and if it is growing on or out of the depicted persons cannot be decisively fathomed. 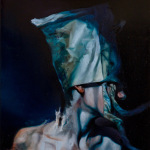