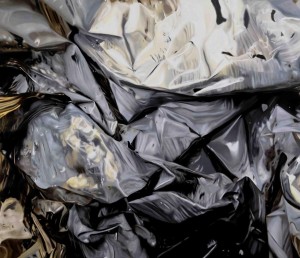 In Marco Reichert’s new series „Ivory Tower” he deals with different kinds of organic structures and surfaces, which invite the viewer to explore the visual space between realism and abstraction. The catalyst for inspiration begins with objects from our surrounding world; they range from pictures of chaotic particle systems like smoke and emulsions to scientific images from electron microscopes. Reichert translates this information into his own visual language, removing them from their original context and reappropriating them into his painterly compositions.

In his series „Magic Mountains“ Reichert revives the references to classical landscapes but again based in his own imaginary world. Psychedelic shapes and a kind of Pop-art complexion brings the observer in an environment he has to explore. These mountains remind us of silk glaciers with candy filled valleys or scientific macro-photography, the intermixture of contexts creates new content.