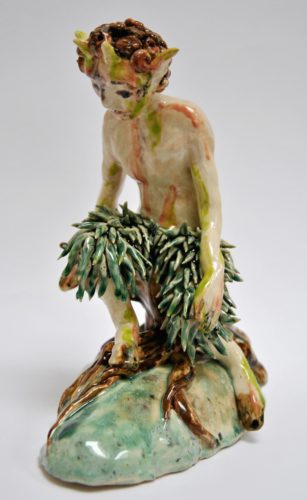 With her small-scale pictures and objects, Beate Höing lures the viewer into a shrinking world. Her paintings are based on photographs from a private fund and show a petit bourgeois ambience with lace doilies and crocheted cushions, plastic flowers and patterned wall paper, in which—between rustic furniture and loving bric-a-brac—there is simply too much of everything. In such worlds of homey orderliness there repose many memories of childhood and snug security, of a certain (moral, perhaps also mental) narrowness that, with today’s globalizing efforts, can no longer really relate to all of life’s diverse levels. But this form of antiquated climate also embraces (or embraced) a comforting human dimension and the feeling of a (former) idyllic world.

In her works, Beate Höing transports and transforms childhood memories that conserve and touch on the viewer’s reminiscences. She however does so not in any documentary form. With a certain dowdy coziness, her pictures have something irritatingly profound in them, which cannot be explained at any first glance. Perhaps it is this focus on a form of living as the expression of a life style that may no longer suit our modern attempt at gracious living. Something fairy-tale and child-like is lovingly paired with smugness and fustiness, without condescension but also without idealization or wistfulness.

In her porcelain objects, Beate Höing recreates ironically the world of her paintings, which she composes from flea market finds and her handmade pieces. She couples her own figurines with the partly kitschy, partly pretentious porcelain figurines from secondhand sources, lending the found objects a new narrative content. The consciously imperfect figurines, whose effect is always somewhat improvised and quirky, symbolize the tenuousness and vulnerability of the cozy world that they—and the paintings—reflect.

Thus Beate Höing offers the viewer a humorous view of a small world that with its privateness and intimacy may at times mean more to us than liberal sophistication in recalling a cozy existence that awakens nostalgia and memories of past times, but that functions less and less since the generation obligated to it is gradually vanishing.

We thank Beate Höing for showing us this shrinking world in her small but artful memorandum defined by paintings and objects in an exhibition that will go on to participating houses in Beckum, Gütersloh and Siegburg. Her tongue-in-cheek memorial is to a collective way of living and a soon to be historical social form.