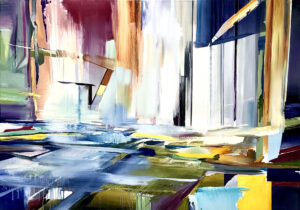 With the artworks by Florian Fausch and Beate Höing in the exhibition „It’s a Match“ janinebeangallery shows a juxtaposition of abstract paintings and on the other hand sculptures featuring rather figurative and symbolical topics. Florian Fausch’s paintings are transitions from geometrical, architectural structures into deep color fields and gradients. His contrasting luminous colors can also be found in the hybrid sculptures of Beate Höing, who combines objets trouvés virtuosically with her own ceramic objects.

Beate Höing—inspired by the ornamental and the textural material used in the cultural-historical folk art of fairy tales and myths as well as of traditions and rituals—took up these influences in her painting and ceramic work. Out of them she has created her own autonomous iconography. Hereby already inherent,associated and recollected images come together in an ambivalent game of reality and fiction where dreams and nightmares, relief and dread lie side by side. Materiality and form are thus inseparably linked. Furthermore the artist’s oil paintings and ceramic sculptures, including her installations, tell of a passion for the beauty, the delicacy and the aesthetics of things as well as of a playful lust for all innate possibilities.

The ceramic material indirectly calls up a suspicion of kitsch, but also of traditional craftsmanship. This “loan” counteracts the content-related statement that the artist almost provocatively intensifies. The incorporation of bric-a-brac and porcelain figures—for centuries the embodiment of bourgeois taste, loved as decorative itemsor souvenirs or dismissed as kitsch—offer adequate space for the imagination and the fantastic. Maidens and youths, fairy-tale and fabled creatures or animals asleep or dreaming: these fragile figures grow out of floral and opulent pedestal elements, stand on their own, present themselves in figural arrangements, or asroom-high, wall-filling installations.

Beate Höing’s works cast a very poetic, at times ironic, glance onto the past, tell of nostalgic memories, of dreams and surreal worlds, complete with a whimsical twinkle of her eye. (Jutta Meyer zu Riemsloh M.A., from the German by Jeanne Haunschild)

City is the topic, it is true. There is, however, no townsman, who is being at work a painter. Florian Fausch grew up rather rurally in Switzerland. For this reason, his eyes are in an unbiased way attuned for the view on the phenomenon town. From the direct experience of a pulsating town like Düsseldorf, where his studies led him to the Art Academy and where he staid after he had been awarded the Master Craftman’s Diploma, there are nourished experiences which are taking shape in his paintings. Anonymity, volatility and cityscape as an imperfect artificially designed space which surrounds the human being as a constructed volume, this is the topic of his current works.

In addition to this, Florian Fausch searches systematically in newspapers and journals for usable pictures, that means for aesthetically already pre-selected and processed image material. These submittals are applied in the form of citations and only in excerpts, but in the framework of the act during which these submittals are used in painting they undergo a radical change.

The characteristic feature of Florian Fausch’s paintings are deserted spaces which are giving the viewer a position from outside in front of the image, it is true, but these paintings are at the same time enthralling the viewer in the painting, as if there existed a secret connection between real and pictorial space. This ambivalent impression is based on the combined effects of a perspective rough structure and – due to the style of painting – the gradual blurring of this rough structure.

As a rule, there are the diagonals which are decisively affecting the image by targeting a vanishing point beyond from the centre on the horizon line. The result of this, is an asymmetric approach suggesting as large as possible wideness and depth, because the lines can maximally unfold on the image plane. There are often integrated traced lines in the image or colour areas collide and disclose imaginary borderlines. Nevertheless, this method of painting does not lead to spatial clarity in the image, but architectural interior and exterior spaces are entwined in such a way that they are interchangeable like a picture puzzle. The things which have just been in the background suddenly seem to be in the foreground and vice versa.

Although the image is deserted, the presence of the human being in the image is conveyed by the own experience of the viewer in the form of the perception on the move. Here, the restless, unstable view, which is the specific of the urban wanderer, who tries to orient himself when passing through the town and looking out for temporary markers, finds its expression. Momentary focussing is alternating gradually with the status to lose sight of something. The actions taking place at different times are painted in these pictures as simultaneous action, as multiplicity of sights, and this is noticeable in the obvious liveliness of the paintings. Florian Fausch’s images are no sterile vedutes, but compact, dynamic “cityscapes” which are put together in the form of a labyrinth on the basis of a multiplicity of moments of stays and “pans”. It is no coincidence that with regard to Florian Fausch’s works there can be applied terms from the film, especially the genre of Science Fiction, but he is also highly familiar with digital scenarios from animated computer games. The painter is, thus, building on common space metaphors applied in this field where fractions and jumps are disclosing that the binding to time inevitably relativises the isotropic spatial conception. The viewer, thus, does not reliable settle down in his images, because of the burst open ground which is similar like blocks and “massifs” symbolically makes walking an adventure.

Florian Fausch’s way of painting is very complex, by bringing divergent objects formally to an entity. In this case, the colour takes the double role as illusionist means and as material released from the mimetic task. Sometimes the image area seams to be for Florian Fausch the experimental field for the different kinds of uses of colours separated from the objects according to the varieties of the recent art history. Sometimes, the colour is put in a very liquid condition on the canvas and the flow of the colour is provoked by moving the plate. Tears of colours and cords are conquering the surface in tentacle-like fashion. Apart from transparent varnishes, thick, in broad swathes applied colours are rising from the space. Smooth transitions are changing with rigid razor-sharp contours which are force by tapes. Surface encounters spatial dimensions, small-scale attention to detail encounters generous emptiness. A painting method that looks at the first glance like free playing with the possibilities of colour, is always integrated in the geometric framework of the splintering perspective. And even more: the labile arrangement only generates itself from the colour.

In this context the, unifying means is a consciously exaggerated, almost bright, but never colourful atmosphere of colour that Florian Fausch partially ruptures with white. The painter works with warm-cold contrasts as well as with extreme colour intensities which he makes colliding abruptly. The painter even increases more the light-energetic dynamics resulting from this working method – depending on their closeness to one another, colours push forward or flee backwards – by a targeted setting of lights and reflections in white, which seem to float like ghost lights in front of the image area. The result of this is a strange shimmering of the images, as if you were looking into a colourfully cut gemstone. Light, thus, absolutely plays a role, but it is not a light which reflects real conditions, but it is rather a gleaming of individual parts of the image coming from inside of the image. Reflexes multiply themselves by mirrorings, origin and impact are being blurred, if, for example, the colourful echo of a neon sign becomes apparent on the wet pavement.

As far as Florian Fausch in concerned, aspects of individual experience in the urban context are melting with references with regard to medial aesthetics and digital worlds. In the pictorial balance of his paintings, elements which are apparently contradictory find a temporary expression for the awareness of life being fragmentary and in the form of citations, of the young generations of artists, an awareness of life that is not interchangeable anymore with the postulate of a placement without contradiction.