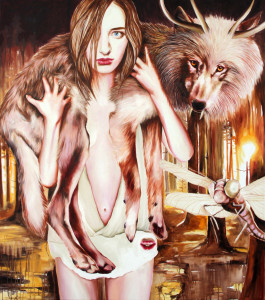 In the new luminous paintings of Anna Borowy individual human characters can be found as central subjects whose only environment are natural motifs. The beings of nature with whom the human protagonists interact seem surrealistic due to their character as hybrid creatures, but also by the abnormal scales of palm-sized wolves and owls or huge insects. This is matched by the unconventional use of colours for the composition of furs, wings or skin which correspond to no natural natural scheme but are a typical and specific feature of the world concept of the painter. The strange shades and divisions of physiognomies into areas of magenta, yellow, purple and earth tones can also be found in the meticulous elaborations of hair and fur as the distinctive style of the artist.
Remarkable for the new series of paintings of Anna Borowy are the continuous and metamorphous ties of the portrayed persons with beings of nature, animals as well as plants. Deviating from her former works she consequently exceeds the mere dialogue by combining humans and animals to chimeras and mythical beasts.
At the same time the surrounding and virtually merged animals seem not harmful nor demonic, even if attributes like fangs and beaks could give occasion to that. Also the transformed humans don’t appear unnatural or monstrous but rather sublime and peaceful. Accompanying chimeras like dragons, winged rodents or antlered wolves seem benign and rather amicable companions or in need of human support.
Although the humanoid hybrid creatures connect very obviously with nature and therefore physically identify with it, they nevertheless wield a silent orphic power upon nature, which relates to the gathering of animals around the centre of the paintings. Traditionally each of the depicted creatures yields a big symbolic potential, resp. an animistic power. The souvereign human actors however are not subordinated to those avatars but with their calm focus give evidence of mental independance.