The title „Hinter den Spiegeln“ (Behind the Mirrors) of Anna Borowy‘s new series of paintings refers to the German translation of the title of Lewis Carroll‘s book „Through the Looking-Glass“ for a reason. In Anna Borowy‘s new images, too, we are set into a phantastic world of odd creatures and peculiar sceneries.

The unreal or naturally ornamented backgrounds are filled with dense, shining colours just as the figures in the foreground. Strange and multi-coloured textures are generated this way, which in separated details seem impossible to be connected with the object they are describing, while as a whole structure they are creating a clear but novel correlation. The depicting of a veritable bear for example works with an astonishingly colourful fur, which at a closer look is composed in big parts of colors like pink, yellow and blue. During such examination of Anna Borowy‘s artworks the own perception comes as a surprise, as it – given the apparent mismatch of colors – doesn‘t wonder about the reason for the lack of conventions, but finds the objects immediately and intuitively in a particular and coherent arrangement.

A repeated scheme with regard to content is the correlation of animals to the central human characters. These animals do not only interact with the protagonists, but seem to communicate with them, including very human features and roles. The animal figures seem to be spellbound and transformed by the magic of quasi orphic characters and their sounds-turned-pictures. On the other hand the creatures themselves reveal such human mimic, they resemble embodied totems or captivated animals in fairy-tales. For above-mentioned bear for example this trait culminates in his doubtlessly human blue eyes

The proximity of the often maidenly protagonists to predators causes a particular tension. Contrary to their nature the predators don‘t pose a threat to their tender counterparts, but appear to be tame and devoted. Surprisingly these wild creatures in their (onesided) affection seem to be more vulnerable than the object of their dedication.

The works of the new series „Keine Tränen für die Kreaturen der Nacht“ by Tanja Selzer are technically striking by their intense contrasts. Apart from those images kept in black and white, the colors applied emphasize the violet optical spectrum. Even so do these colored areas not appear monochrome, but astound by a variety of nuances the artist creates through gradients of the oil colors.

The title of the series points at its contents: A continuous motif are predators, posing a threat to humans, while being endangered themselves. Consequently these animals are equally shown harmful and vulnerable.

Lured by the optical charm and luminance of the works, the spectator will be suddenly confronted with thematic possibilities which evoke – only slightly more indirectly than the first attraction – immense doubt and urge to new interpretations. For example what illuminates the „Stier“ („bull“) so gorgeously are his burning horns; so his threatening dynamic expression not only testifies his aggression but also his agony.

Similarly bivalent are also the depictings of humans, whose expression and environment shine just as appealingly as they contain dramatic connotations. Thus do the glaring complements of light and shade in Tanja Selzer‘s works correlate with their connection of ease of access and profound semantics. 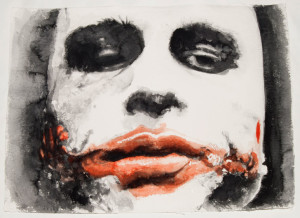 „Objects in The Mirror Are Closer Than They Appear“

The paintings of Marco Reichert utilize the themes and motives from the vast and ever increasing image bank of the loud and fast consumer society. By redirecting these images into source material for paintings, Reichert obfuscates the original and intended meaning, content and context of mass media. We see a new image world in which the protagonists are caught in a new structure and texture; in fact, sometimes not just caught but indeed drowning. This new pictorial reality of the ‘Jelly Series’, which comprises the core material of the current exhibition “Objects in the mirror are Closer than they appear’, connects the main themes of Reichert’s past work, focusing on subjects from the everyday flood of images, with the creation of personal memories and experiences. The motives/themes are culled from their usual connections and melt together with and in their new environments, which are dominated by color and light and a self-reflecting surface. Viewers can find themselves in this new world, which, as the title indicates, is closer than it appears. 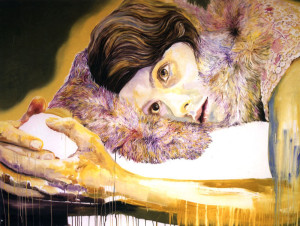 Anna Borowy’s motifs are primarily human characters and moments, depicted portrait-style and manifesting particular events. The reduced appliance of outlines and forms connects the figures with the backgrounds and accompanied diaphane images of animals. The apparent youth and grace of the potrayed are distorted by flawy structures and sinister traits.

Technically remarkable is the soft, silhouette-like application of color. Though appearing like water colors, the applied paint is oil-based with a special consistency allowing the blending with water. The base white coat of the painting is not being colored completely by the artist but serves as a continuous bright background on which the paint is thoroughly arranged. Thus the figures of the paintings appear partly overexposed, corresponding to the overlapping of several transparent image elements. Since the resulting point of view, i.e. transparency normally can only be achieved by alternating perspectives, the effect in Anna Borowy’s paintings is one of particular dynamic. This way her works fulfill not only a spacial but also a temporal perspective.

Through the limited use of paint the white background is being conserved as a structure or matrix for content, causing lightness on the one hand expressing emptiness on the other. Emphasis on the later skillfully highlights and complements the manifested motifs and forms.

Repeatedly Anna Borowy joins animals with the human protagonists in her paintings. The expression of this fauna ranges from symbolic meaning to common gestures, but either way the affinity to humans is very immanent and perceivable. Humans and animals are not shown as counterparts, but as reciprocal allegories and mimicry without their identities being merged Ovidian-style.

It’s not easy nowadays phrasing legitimately a primarily positive aesthetic attraction. But Anna Borowy’s works succeed in generating genuine processual beauty and are capable to derive from this constituent any other living or dead facet.

For the two sculptures featured in this show Anna Borowy cooperated with the American artist Juan Balandran (Red Rooster).