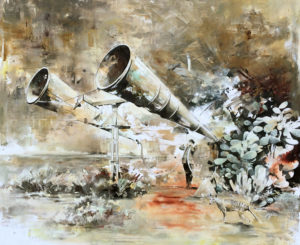 In the paintings of Inna Artemova humans interact with strange technical apparatuses, which sometimes resemble such known mundane devices as flat irons, but anticipate a much more bizarre function in their wider arrangement. The anachronistic appearance of the figures, their bourgeois-socialist style contrasts the futuristicly surreal engineering in which they are integrated with astonishing familiarity and confidence. Likewise appears the surrounding nature like fantastic phenomenons – in the shape of extincted animals, luminescent abstractions of plants right up to sheer geometric structures. As if a socialist and scientific realism had passed through a derealization, Artemova’s protagonists seem to be located in yesterday’s tomorrow as in a surreal parallel presence. This state as an intellectual world does not appear as strange as it could, because of the mundane and humorous conjunctions the artist provides. Said flat iron for example is used by the hand of a solicitous house wife, who is opposed by a man or husband stuck in a kind of sweatbox and looking as bewildered as being ignored.