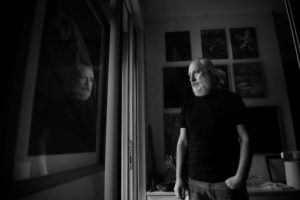 Orion Shima’s painting is a matter that has been “seasoned” for a long time. For almost two decades, his painting seemed to address the same concern, which is, in fact, an internal process, with its elements constantly moving and recomposing themselves to reach a kind of filtering or the highest clarity, notably coinciding with his works of the recent years. In his early days as an artist, Shima explored abstract painting and showed an interest in matter painting. These experiences have left their mark on his artwork. Along with his academic formation during the art school years, one can say that they constitute the matter that currently inspires his painting – a figurative painting, essentially uninterested in objective reality.

Shima uses figurative representation as an initial impetus or pretext to create some personal marks, through which the artist builds a perceptual, individual world. This is a world of feelings and emotions, deciphered through painted situations and characters.

Shima usually works fast. He quickly throws raw paints – slightly mixing them – directly onto the canvas, not on the palette. He follows a preliminary sketch or drawing, but the colours give impetus and determine the work’s shape. The brush’s movement creates the rhythm that the work needs, while the paint’s thickness gives the required intensity. In the multicoloured (sometimes even monochromatic) tension and drama created on the canvas’s square, painted objects overhang in suspense. The pictorial gesture used fanatically in every corner of the canvas’s surface, gives paintings a material sensation, reinforcing their inner subjective atmosphere, an atmosphere of dream and vision.

Shima paints by heart and does not use visual references other than his memory, which revolves around the painter’s childhood and adolescence.

In addition to its strongly manifested style, Orion Shima’s painting also speaks through the selection of themes. Nature, vegetation, man, and animals are the only subjects of his paintings, as if to confirm that painting is an analogy of the living things. His characters are lonely people, lost and distracted whose portraits we rarely distinguish. They speak through silhouettes and quick but accurate spots, always playing the role of the painter’s own alter ego.

The characters in Orion Shima’s paintings are not only references from romantic art painting in general, but also contemporary romantic characters thrown in an alien and rejected world, finding refuge and solace in the shadows of a dense vegetation, positioning themselves at the edges of the world.