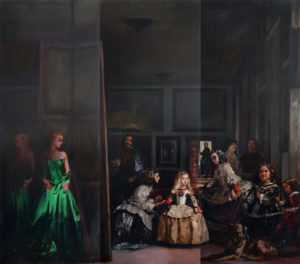 In his recent series of oil paintings with the title „Silent Green“ Armin Völckers interprets and recreates the models of classical tableaus. The viewer faces in one image the homage to the artworks of Völckers‘ precursors as well as an ironic dissociation from these by clichéd exaggerations and the addition of irritating artifacts. Armin Völckers changes colours, outlines, proportions and specifically contents of the originals, to generate a stylistic and contextual potential. Consequently the original images serve as powerful vehicles for anachronisms and stylistic inconsistencies, which Völckers integrates so organically in the existing templates, the original narrative ist not only modified but clearly expanded.

Armin Völckers was born in 1963 in Berlin and grew up in Rio de Janeiro. From 1983 to 1988 he studied Visual Arts at the UdK Berlin.
Beside painting Armin Völckers has also worked as a screenwriter, film director and producer of animated series for children. His debut feature film „Leroy“ won the German Film Prize (Lola) for „Best Children‘s Film“ and „Best Musical Score“.  Armin Völckers is a member of the German Film Academy.
Armin Völckers‘ paintings are in international private and public collections such as The World Bank (Washington DC), HypoVereinsbank (Unicredit), Schering AG (Berlin), Sir Paul McCartney, Patricia Highsmith (Estate).