Anna Borowy titled her this year‘s solo exhibition in janinebeangallery „Champagnerbad“ (Champagne bath), giving an ironic hint in advance which the random spectator might require facing Borowy‘s elysian show of blessed figures. Nevertheless her artworks don‘t need this headline for comprehension, since the overwhelming sensuality of the paintings finds grounding in the firm calm of the expression and balance of the protagonists. Their sphinxlike posture ban the spectator not only with a transfigured noli me tangere, but also they are genuine catalyzers for the viewer‘s pause to think.

Where the generell artistic consent falls regularly into line with the ugliness and hardship of society insofar as it mirrors these features as cathartic as possible, Anna Borowy seems to lever with the other end of the spectrum of human nature and its abysses. For her the instrument and object of unmasking a hypnotic beauty, smooth and adamant. Thus one can feel reminded of the streak of rage of the female luminous figure Galadriel in Tolkien‘s „Lord of the Rings“ about how she would reign with the ring: „Not dark, but beautiful and terrible as the Dawn! […] All shall love me and despair!“ Preceding this tradition is the fate of the mythological character Hylas as a co-sailor of the Argonauts. His short tale as the beloved lad of Heracles ends with

his abduction by a group of water nymphs, keeping him in their care. This way young Hylas is safe from the dangers of the cruise of the Argo, but he now imposedly dwells in the matriarchal sphere of the nymphs, who will hide him forever. It is these nymphs sharing features with the female figures in Anna Borowy‘s paintings, they appear innocent and are seductive and captivating at the same time.

So the beauty in Anna Borowy‘s paintings is noticeably ambivalent, being real and powerful as such, but also immanently abyssal in its consequences and backgrounds.

Though applied with oil the colors in Tanja Selzers paintings appear translucent and bright as in a watercolour. This seeming lightness of paint is supported by deliberate meltings of colours and outlines. It appears the dilution of colors is partly maximized to a threshold of viscosity during the process of painting, thus causing running paint along gravity, i.e. vertically.

Dark, homogenous areas are being retained as high-contrast shadows in a dominating front-lighting. That same opposition is evoked reversely in other mainly dark paintings through their portions of over-illuminated sections.

As a consistent subject Selzer arranges steam or mist in the brighter parts of the images. The gaseous aggregation comes with the blurred outlines of the figures and objects, underlaying a material, i.e. molecular dynamic. The melting or dropping of paint consequently appears as a following conden-sation.

Liquid transfers of shapes put the figures and backgrounds quasi in a common solvent, in which only some foregrounded protagonist‘s contours are properly focused. Like looking through a rain-swept window, forms and surroundings fluently and coherently blend into each other, not just spatially, but due to their implicated motion also temporally. Fluid blurring and over-illumination guide the viewer from initially concrete sceneries and events in Selzer‘s images inductively to a common diaphanous matrix.

The artist‘s paintings shown in the exhibition „Subrosa“ feature as motifs snapshots of social-zeitgeisty or individual dimensions. But the viewer is always situated in front of thoroughly arranged momentary takes, making the association of a temporal before and after inevitable. This narrative tension in Tanja Selzer‘s paintings is ambigious but intense. As specific the individual image is expressed, it also poses a crossing of multiple possible events, like a fateful superposition of the past and the future. 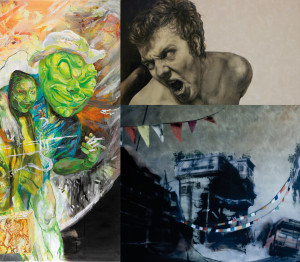 For the first time in Berlin: the large-sized drawings of the New York artist Amber Sena. With motifs like quasi photo-realistic drawn sculptures and a distinctive emotional impetus her drawings occupy their very own space. Facing the striking classical reminiscences in the images a formal time frame opens for the spectator, which the artist combines skillfully with the very present expression of timeless achetypes. 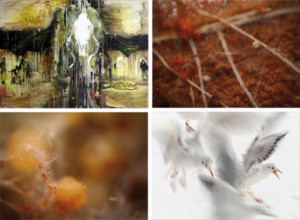 The paintings, sculptures and video installations by Kerstin Grimm, Tanja Selzer, Sabine Wenzel and Sevrina Giard show creatures as beings from different spheres: gods and demons, animals and beasts – staged aggressively, erratically, unlikely and pitifully they are defining the motif.

The exhibition’s arc of suspense yields almost by itself: The photographically appealing paintings of Tanja Selzer set an antipole to the picturesque photographies of Sabine Wenzel. Kerstin Grimm’s surreal drawings and sculptures as the video of Sevrina Giard complement the sight.

Tanja Selzer draws her motifs from the daily media-related flood of images as components of human seceneries, figures in wild natural spectacles or single persons and animals infront of or inside a natural background. She changes these images by composition, shift of colour and an ease of paint application, so they appear in the guise of a pretended, mostly idyllic scene.

The alternating depiction of humans and animals or also their interactions are an expression of their mirror-symmetric anima. Selzer stages this without psychologic abstractions but with the genuine intensity of a direct line to the source of fables and tempers.

„As Time Goes By“