In the group exhibition „Dodo Dialogues“ janinebeangallery will show the artworks of the five artists Anna Borowy, Dominik Butzmann, Kathrin Günter, Arny Schmit and Martin Stommel as a conceptual juxtaposition of humans and nature. The paintings of the artists Borowy, Schmit and Stommel feature both landscapes and animal figures as motifs albeit entirely sparing any human person. In contrast, the photographies by Dominik Butzmann as well as the collages of Kathrin Günter present humans as main actors, though due to their roles as ecological activists or―in the case of Günter―through their surroundings they are unmissably associated with flora and fauna.

In Arny Schmit‘s landscapes the technique alone very materially reflects disturbances. Schmit uses multilayered cardboard as a carrier for his oil colours, cutting it open at specific spots and mounting a fluorescent tube across above it. His motifs are rather un-idyllic realms, chaotic vegetation and rampant, perilous weather prevail. This atmosphere is created and supported by his deconstructive since ablating wipe technique which repeatedly skews and crosses shapes and layers of paint. The mentioned mounted fluorescent tubes on some of his works contrast strongly, encumbering the painted landscape with an epitome of industry and civilisation.

Animals only own the foreground in the paintings for the exhibition by Martin Stommel. The fluent shapes of animal bodies are dynamically interwoven with one another and an organic background. The animals are densely graduated into the pictorial space, their outlines are partially merged, still the painter accomplishes to express and emphasize the bodies and their movements by a reduced and concentrated application of colour. The works „Day 6“ and „Der kleine Garten“ („The Little Garden“) are derived from biblical themes, namely Genesis and paradise. Different to its classic models though, Stommel provides no depiction of the creator himself in humanoid guise. The animals―in the case of „Der kleine Garten“ extincted ones only―stick with their kind and are the self-sufficient splendour of the artworks.

In the paintings for the exhibition by Anna Borowy animals are also the sole protagonists and get along without humans. Their expression and stance of her creatures however feature astonishing and familiar human traits, emphasizing the soulfulness of Borowy‘s fauna. Her graceful creatures appear as moved by emotions, their condition is both physically and spiritually precarious. The painter however didn‘t set animals as mere placeholders for human characters but depicted them as beings of intrinsic value, respectively as animistic complements.

The collages of Kathrin Günter have in terms of content addressed diverse agents of environmentalism. For these „portraits“ of persons like Leonardo Di Caprio, Greta Thunberg or Jason Momoa the artist employed digital pieces of images from their Instagram accounts and combined these with pictorial elements of animals to a new fabric. The results are hybrid avatars of humans and animals outfitted with the symbols and gesture of their ecological commitment and positioned in front of a threatening background of forces of nature.

Kathrin Günter also reflects the potency of self-expression and the cult of personality as a common projection in the social media. In this context in particular Günter has compiled a book with thousands of printed comments taken from the Instagram account of Greta Thunberg. Especially the reactions on her person illustrate the Janus-faced character and the abysses of social media: on the one hand in their capacity as very potent amplifiers and transmitters of a movement, on the other hand as a reservoir of human malice.

With his two photographies Dominik Butzmann juxtaposes in the exhibition the portraits of two salient figures of environmental activism. The image in horizontal format with the title „How Dare You?“ depicts the Swedish eco-activist Greta Thunberg, who here fixates the viewer sternly and according to the title. The second work titled „How Dare I?“ shows the last Environment Secretary of the German Democratic Republic Michael Succow with a serious but also lenient expression. Besides many other commitments for environmental protection Michael Succow has taken care of the resolution of the so-called National Park Agenda in the very last of the Council of Ministers of the GDR in 1990, thanks to which seven percent of the whole area of the former GDR have been transformed into nature reserves.

Though both protagonists portrayed by Dominik Butzmann categorically have committed themselves to the same cause―the protection of the environment―in terms of attitude and method they seem to approach their common aim from contrary positions. What is perceivable in the differences of the biographies of the two characters, their policies, their ages, respectively their generations, their cultural backgrounds, can also be subtly read from the black and white portraits by Dominik Butzmann.

Though the subjects of the paintings of the exhibition are entirely and independently effective, the lack of depictions of humans is striking, albeit the traces and implications of human influence are manifest. The artworks realise the beauty and vulnerability of nature as well as empathy with the creature. This implies an answer to anthropocentrism, which can also be understood as a root cause for the negligient handling of nature.

The photos and collages of the exhibition endorse the criticism of mistreatment of nature, although from a different angle. Here it‘s the portraits by Dominik Butzmann of the very different representatives of environmental activism on the one side and on the other are the celebrities accompanied by animal avatars in Kathrin Günter‘s collages, commited to environmentalism discreetly or with the help of the cult of their personalities.

As an ensemble and by the inherent or obvious juxtaposition of nature and mankind the works of the exhibition „Dodo Dialogues“ emphasize the necessary realisation of the symbiosis, in which both are situated. This connection also manifests in the current COVID-19 pandemic and the vulnerability of humans in nature, since they are a part of it. The behaviour of nature and humans self-evidently mutually conditions each other, to their advantage or harm. 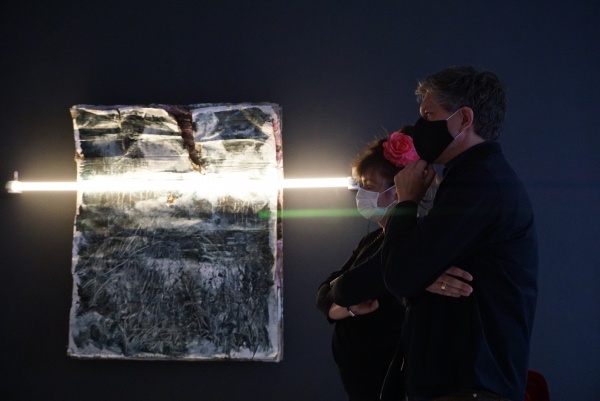 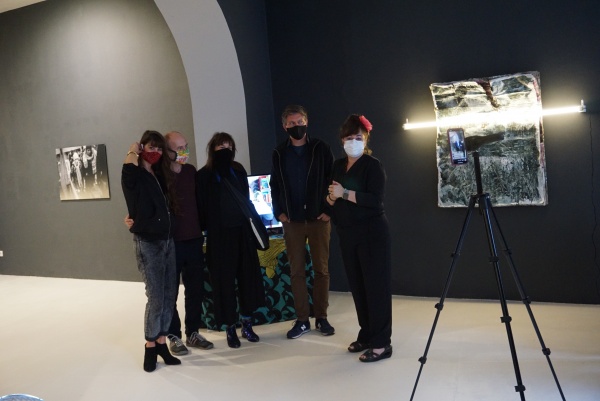 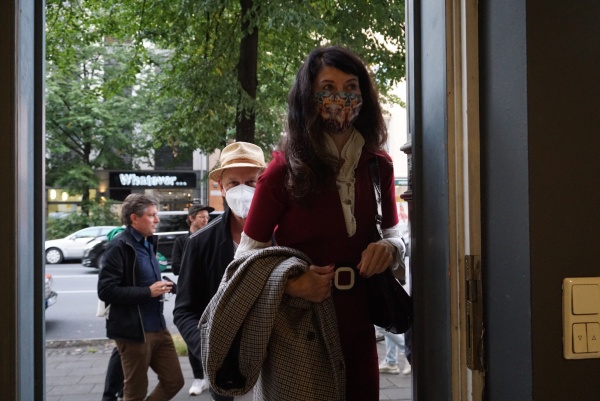 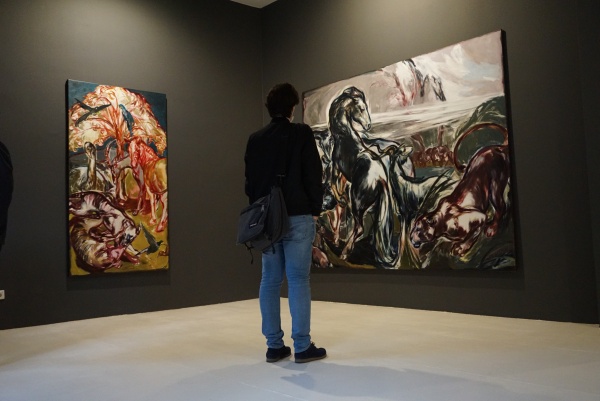 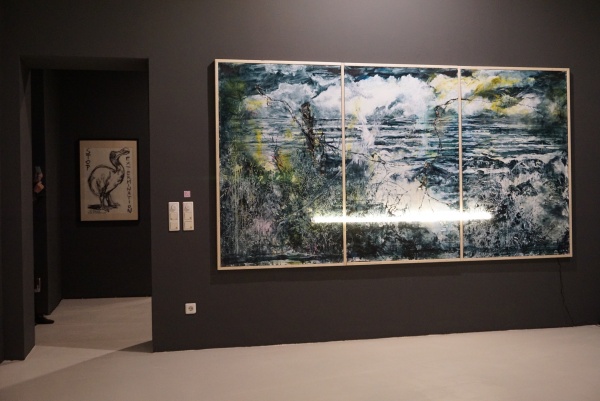 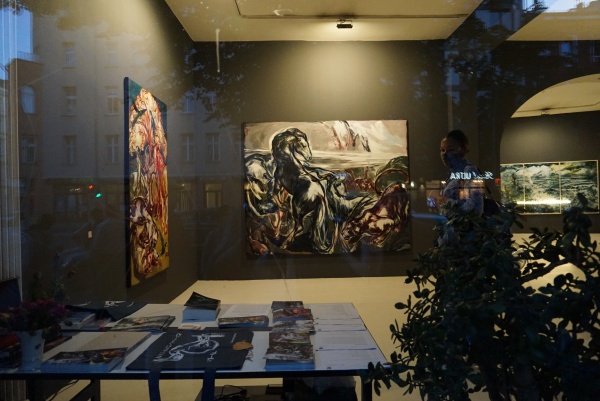 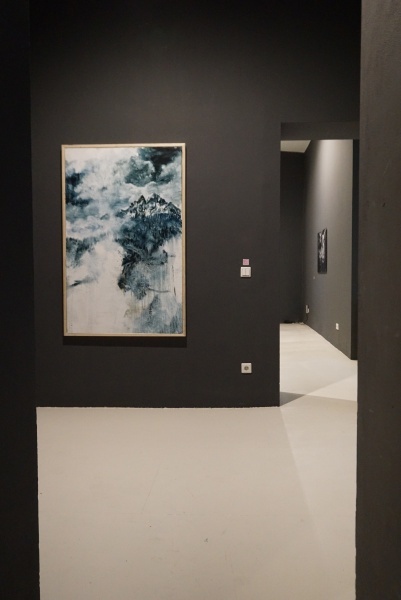 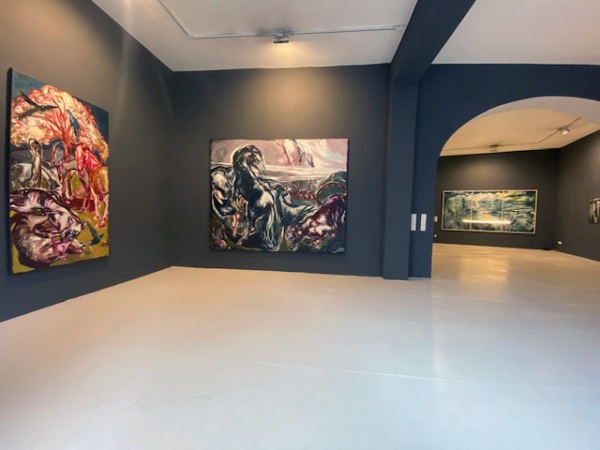 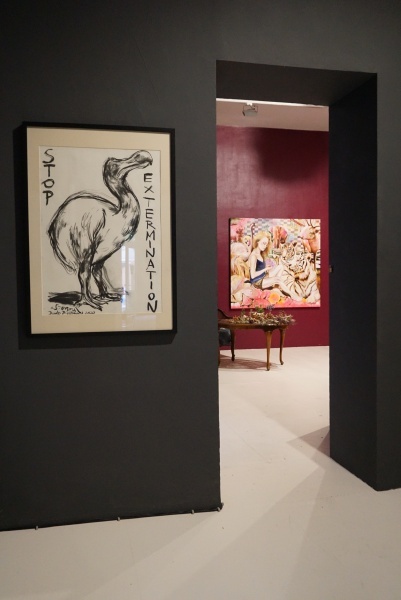