The exhibition is supported by Stiftung Kunstfonds and the German Federal Government Commissioner for Culture and the Media.

The janinebeangallery presents in its exhibition „Moonlight at Noon“ paintings and works on paper of the Albanian artist Orion Shima and the German artist Martin Stommel, living and working in Bonn. Both have been producing their artworks for several decades and are exhibiting internationally.
The basis for the exhibition „Moonlight at Noon“ featuring artworks by Orion Shima and Martin Stommel was established in 2019, when we came into contact via the internet with the Albanian gallerist Lauresha Basha of Gallery 70 in Tirana, Albania. We liked each other from the outset and furthermore discovered common grounds regarding the alignment of our galleries, spawning the idea for a more extensive exchange. In June of that year we relayed an invitation from Lauresha Basha to Martin Stommel for a solo exhibition at Gallery 70 in Tirana.
For this exhibition Martin Stommel travelled in October 2019 to Tirana and was not only delighted by the candour and cordiality of his hostess but also by the kindness of the general public. Among other artists he was introduced to Orion Shima, who is also engaged as a professor at the University of Arts in the Albanian capital and who expressed his immediate trust by spontaneously letting Stommel give a lecture to his curious students.
Apart from our fundamental enthusiasm for the work of Orion Shima we noticed the mutual sympathy of the artists as well as the reciprocal understanding for their artistic works. This very naturally authored the concept of a common exhibition of the two artists in our premises in Berlin.
A common thread of both artists is the genre of figurative painting. Style and content of Stommel and Shima are despite all differences connected by the archetypes underlying the subjects, respectively the pursuit of them.
With the exhibition we want to bring the works of Martin Stommel and Orion Shima—considering their European but highly different cultural backgrounds—into dialogue. The formal distinctions are being clarified by the juxtaposition, while the masterful artworks as a whole of both artists embody an independent, cross-cultural artistic medium, which connects very fundamentally.

Orion Shima’s painting is a matter that has been “seasoned” for a long time. For almost two decades, his painting seemed to address the same concern, which is, in fact, an internal process, with its elements constantly moving and recomposing themselves to reach a kind of filtering or the highest clarity, notably coinciding with his works of the recent years. In his early days as an artist, Shima explored abstract painting and showed an interest in matter painting. These experiences have left their mark on his artwork. Along with his academic formation during the art school years, one can say that they constitute the matter that currently inspires his painting – a figurative painting, essentially uninterested in objective reality. Shima uses figurative representation as an initial impetus or pretext to create some personal marks, through which the artist builds a perceptual, individual world. This is a world of feelings and emotions, deciphered through painted situations and characters. In addition to its strongly manifested style, Orion Shima’s painting also speaks through the selection of themes. Nature, vegetation, man, and animals are the only subjects of his paintings, as if to confirm that painting is an analogy of the living things. His characters are lonely people, lost and distracted whose portraits we rarely distinguish. They speak through silhouettes and quick but accurate spots, always playing the role of the painter’s own alter ego. The characters in Orion Shima’s paintings are not only references from romantic art painting in general, but also contemporary romantic characters thrown in an alien and rejected world, finding refuge and solace in the shadows of a dense vegetation, positioning themselves at the edges of the world. 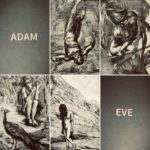