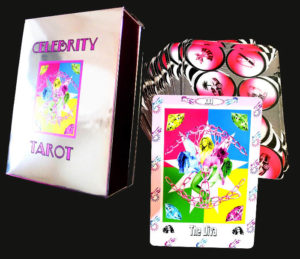 Celebrity Tarot Deck is conceived as a translation of Aleister Crowleys infamous Thoth Tarot into an ephemeral and superficial world of paparazzi and celebrity phenomena.

All 78 cards of the traditional deck, including their ancient and deep-rooted symbols, star signs and planets, have been systematically translated into a contemporary celebrity context.

Through a simple, yet precise divination ritual, each selected celebrity “chose” their respective character/position in the new deck. Online gossip imagery, -an infinite source of inspiration and production, has been digitally altered and re-composed.

The resulting collages exhibit novel and amusing interpretations and divinations. Each celebrity transcends into a novel world of symbols and signs, while their highly superficial and clichéd public image render the traditional tarot world into mere absurdity. Every card and its according divination represent the artists’ own reflections and interpretations of the public celebrity image.