Please note that the mobile version of our website can only provide a part of the information on the artists and their works. 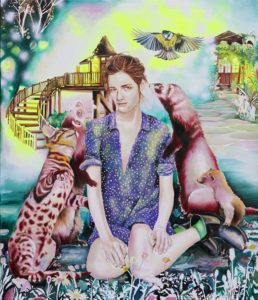 Anna Borowy, born 1985 in Uelzen, Germany, studied painting and liberal arts at University of Arts Weissensee (Berlin) with Professor Werner Liebmann. janinebeangallery is representing her from 2009 on, her artworks have been featured in exhibitions nationally and internationally since.

Anna Borowy’s motifs are primarily human characters and moments, depicted portrait-style and manifesting particular events. The reduced appliance of outlines and forms connects the figures with the backgrounds and accompanied diaphane images of animals. The apparent youth and grace of the potrayed are distorted by flawy structures and sinister traits.

Technically remarkable is the soft, silhouette-like application of color. Though appearing like water colors, the applied paint is oil-based with a special consistency allowing the blending with water. The base white coat of the painting is not being colored completely by the artist but serves as a continuous bright background on which the paint is thoroughly arranged. Thus the figures of the paintings appear partly overexposed, corresponding to the overlapping of several transparent image elements. Since the resulting point of view, i.e. transparency normally can only be achieved by alternating perspectives, the effect in Anna Borowy’s paintings is one of particular dynamic. This way her works fulfill not only a spacial but also a temporal perspective.

Through the limited use of paint the background is being conserved as a structure or matrix for content, causing lightness on the one hand expressing emptiness on the other. Emphasis on the later skillfully highlights and complements the manifested motifs and forms.

Repeatedly Anna Borowy joins animals with the human protagonists in her paintings. The expression of this fauna ranges from symbolic meaning to common gestures, but either way the affinity to humans is very immanent and perceivable. Humans and animals are not shown as counterparts, but as reciprocal allegories and mimicry without their identities being merged Ovidian-style.

Anna Borowy’s works succeed in generating genuine processual beauty and are capable to derive from this constituent any other living or dead facet.